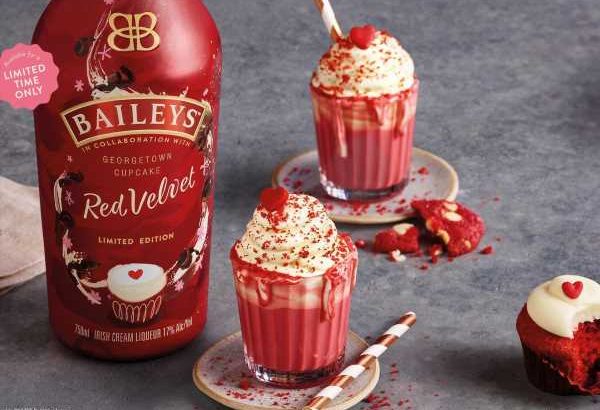 Baileys Irish Cream Liqueur and Georgetown Cupcake have partnered to bring a brand-new flavor to the holiday booze cart: Red Velvet. The top-selling flavor at the Washington DC-based bakery and a favorite among bakers, red velvet is a natural choice for the partnership — and a real win for those of us who always delighted by Baileys newest offerings.

Though we haven't tried it yet, Baileys promises you'll experience the sweet aroma of red velvet cupcakes, sweet cream, and butter icing. Then, when you take your first sip, you'll be rushed away by the bliss of chocolate cake, the tanginess of cream cheese frosting, and the deep, dark satisfaction of cocoa.

In addition to the release of the new liqueur, Georgetown Cupcake will be offering a non-alcoholic Baileys Red Velvet-infused cupcake at all their bakery locations, as well as in their online store, during November and December.

"We absolutely love Baileys, so this is a really exciting partnership for us that has been an absolute treat to work on. Red Velvet is not only our original cupcake flavor, but to this day it's chosen by our customers nearly ten to one, so we're so delighted to be able to give fans a whole new way to indulge," Georgetown Cupcake founders and sisters Katherine and Sophie shared in a statement.

Beginning October 16, Baileys Red Velvet will be available wherever liquors and spirits-based beverages are sold. You can pick up at 750-milliliter bottle while supplies last for $24.

This article originally appeared on AllRecipes.