Chinese takeaway reigned supreme across Britain for more than two decades, but figures published last year suggested Chinese restaurant numbers have been falling in recent years. But for many a Chinese takeaway is still a delicious treat. Express.co.uk has compiled a guide to show you how to make the perfect Chinese from your home.

Start by making the sauce by placing the cornflour in a small bowl and stirring in two tablespoons of the pineapple juice until the mixture is smooth.

Put the remaining pineapple juice in a separate bowl and stir in the garlic, ginger, soy, vinegar, sugar, ketchup and chilli flakes until it is thoroughly combined before setting aside this mixture.

Then cut each chicken breast into seven to nine even pieces and heat the oil in a large non-stick frying pan.

Stir-fry the onion and pepper for three minutes over a high heat.

Then coat the chicken in the cornflour and add to the pan where you should stir-fry it for four minutes until it is lightly browned on all sides.

Stir in the cornflour and pineapple solution mixture and cook for another 30 to 60 seconds until the sauces has thickened and is glossy, turning the chicken and vegetables to ensure they are evenly coated. 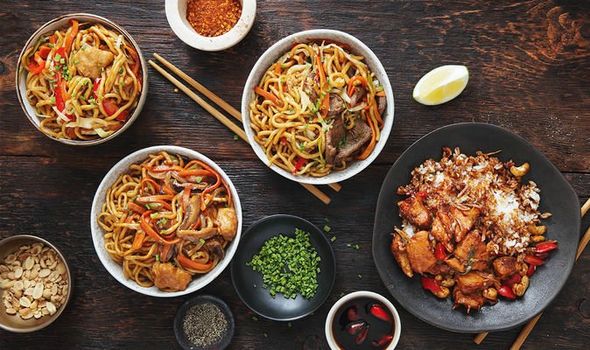 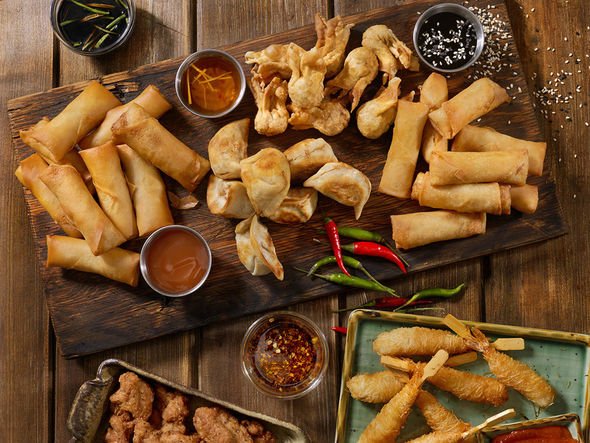 Begin by cooking a nest of noodles according to the packet instructions, along with a chicken stock cube and a dash of Chinese five spice.

Fry half a sliced onion and add beansprouts before adding the cooked noodles to the pan.

Do not be concerned about adding water from the pan in too as it will help prevent the ingredients from sticking to the pan.

Add soy sauce and a dash of oyster sauce to colour the mixture and then keep mixing until all the water has gone, but be careful not to dry the mixture out completely. 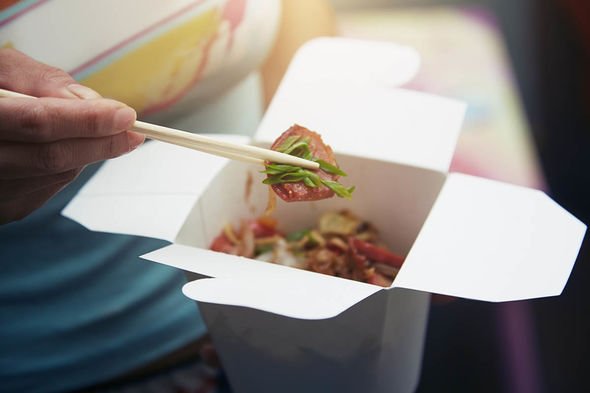 For the dipping sauce:

Begin by cutting off and discarding the flap of fat which hangs above the entrance of the duck’s body cavity and patting the inside of the cavity with kitchen paper before seasoning with salt and pepper.

Rub the entire outside of the duck with the five-spice power, massaging it inot the skin and then place the star anise, garlic, ginger and spring onions inside the duck.

Place the duck on a rack set over a roasting tin and roast for one hour at 160C before turning the oven down to 140/gas mark one and cooking for a further two and a half to three hours, or until the flesh is really tender and the skin is crispy.

To make the dipping sauce, place a small saucepan over medium heat and add a dash of oil.

When this is hot, fry the garlic until it is tender, but not colouring and add three tablespoons of the black bean sauce, the vinegar, one tablespoon soy sauce and half a tablespoon of honey.

Mix well and cook over a low heat for three to four minutes, until it is warmed through.

Taste and adjust the flavours as necessary, you may wish to add more soy sauce or honey depending on how salty or sweet your black bean sauce is.

Transfer the mixture to mixing bowls and return to the duck.

Once the duck has cooked, transfer it to a plate and cover it loosing with foil, setting it aside to rest for 15 minutes.

When the duck has rested, heat the pancakes according to the packet instructions.

Flake the meat off the duck by pulling it apart with two forks then serve it with dipping sauce and the warm pancakes.

Heat the oil to 360F/180C to deep fry the prawn crisps and add the prawn crackers to the oil placing five or six chips in the hot oil, separating them if needed.

Try not to overcrowd the wok or lower the oil temperature as it can lead to the crackers tasting greasy.

Deep fry the chips for five seconds or less, until they puff up.

Remove the crackers from the wok and drain them on paper towels, using fresh paper towels for each new batch of crackers. 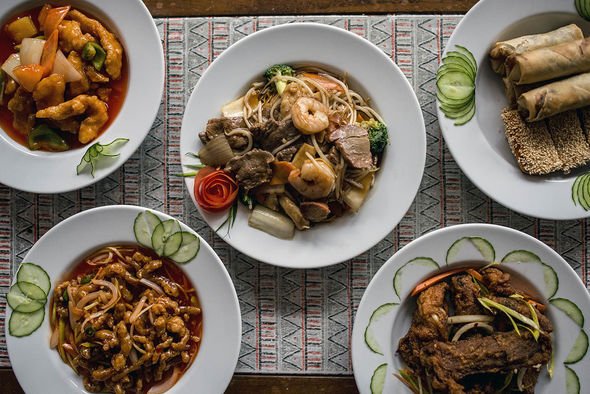 Heat a saucepan and add the rice and water before covering and cooking the rice on a high heat for 15 minutes.

Turn the heat down and simmer the rice for a further three to five minutes, making sure all the water has been absorbed and the rice is tender.

Take the rice off the heat and using a spatula, fluff up the rice grains before serving.

Preheat your oven to gas 4/180C/160C fan and line a baking tray with nonstick baking paper.

Beat the egg whites, oil and vanilla extract in a jug until combined and then mix the flour, sugar and cornflour in a bowl.

Next, pour the egg mixture into the dry ingredients and mix with a wooden spoon, beating out any lumps and set it aside to rest for five minutes.

Drop a tablespoon of the mixture onto the baking sheet and, using the back of a metal spoon, spread into a 10 to 12 cm circle. The mixture can be quite thin in places, almost see-through.

Repeat the process until you have three circles and bake in the centre of the oven for five to six minutes until the edges are just browning, but the centre is still pale.

Remove from the oven and, working quickly, peel a cookie from the paper.

Place a message in the middle and fold the cookie in half, enclosing the message.

Gently bend the cookie in half again, pinching the ends to seal it and leave to set in a muffin tin.

The cookie will uncurl slightly but the muffin tin will help it retain its shape.

Repeat the aforementioned steps with the remaining mixture and do not be tempted to work in larger batches because the cookies will harden before you have time to fold them.

If you wish, sprinkle the finished cookies with desiccated coconut allow to set.

The cookies will remain fresh for up to 3 days in an airtight container.