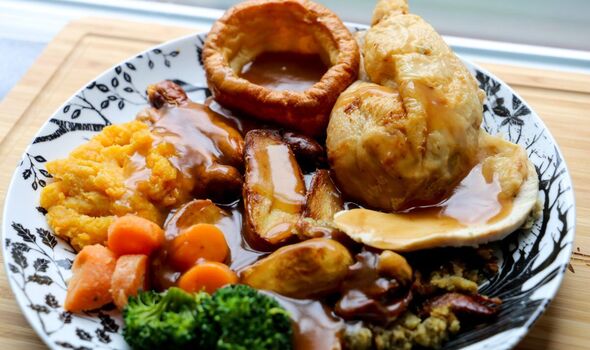 But World Cup football favourites Brazil – before they were knocked out by Croatia – had to make do with 17th place on the culinary list.

The “unofficial” international food tournament ranked the countries with the best cuisines, and saw the USA and Japan finish in the top 10.

And this year’s tournament hosts, Qatar, also featured in the top 30.

The study was commissioned by TUI, which also created its own knockout chart to showcase the top countries in terms of food.

It was designed to mark the launch of the travel company’s The World Cook TV series, which will see 16 contestants go head-to-head in six holiday destinations with country-specific challenges, to be crowned The World Cook.

It also emerged the average adult eats five international meals per week – nearly a quarter of their weekly “three meals a day”.

However, despite expanding their horizons with worldwide cuisine, the classic roast dinner was the most popular world food, snapping up 39 percent of the vote – against things like Mexican tacos (27 percent) and Belgian chocolate (28 percent).

Toby Horry, TUI’s director of brand and content, said: “I’m sure our knockout competition of world food will trigger a lot of debate.

“And although we are an unashamed nation of roast dinner lovers, the research shows that international cuisine has become a part of our everyday lives and culture.

“Like the World Cup, The World Cook TV series brings together people with a common passion – always a winning combination.”

More than half (56 percent) believe eating a variety of foods from around the world has made them more “cultured”.

And 69 percent admitted there’s nothing better than enjoying a range of international cuisines – with those cooking five from scratch each week, on average.

Of the food items made from scratch, the Tunisian dish of couscous (15 percent), Saudi Arabia’s falafel (13 percent), and the Swiss cheese fondue (12 percent), were among the international choices cooked most often.

And almost a third (31 percent) spend a “considerable” amount of time researching international dishes to make and eat.

But 36 percent have gone as far as visiting another country to try out new dishes, with the same number keen to expand their food knowledge further.

And one in four (26 percent) want to make their mealtimes more rewarding, according to the OnePoll data.

While over two-thirds (68 percent) of those who eat international dishes think there’s nothing better than enjoying a range of intercontinental cuisines.

Toby Horry added: “Our new TV series draws inspiration from the teams taking part in the World Cup, and is a celebration of the vast variety of foods we enjoy around the globe.

“And, like the World Cup, viewers can expect a fast-paced, fiercely-contested tournament.

“Sixteen international chefs will cook off against each other in a series of challenges in some amazing locations, with Emma Willis and Fred Sirieix compering.”