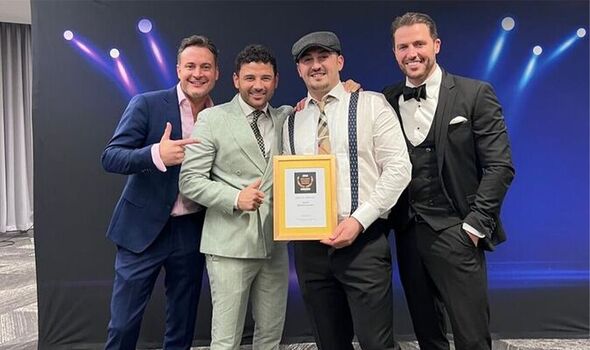 A family-run Greek restaurant has been named the “best restaurant in England” at a national awards ceremony.

Rozafa in Manchester won the coveted category in the England Business Awards 2022. Overjoyed with the achievement, owner Albi Rozafa got an even bigger surprise when his celebrity friends came to the event to cheer him on.

Speaking to the Manchester Evening News, Albi, 42, says he was “stunned” to win the national award, after winning an earlier regional heat of England’s Business Awards 2022. He headed to the grand final in Birmingham on Tuesday night and was delighted that his star pals, former Corrie star Ryan Thomas, Hollyoaks legend Gary Lucy and model Matt Peacock, had turned up to support him.

Albi and his family opened their first Greek restaurant in Stockport, Greater Manchester, 18 years ago, with the Manchester venue following in 2012. It is famous for its traditional Greek dishes like mezze, moussaka and kleftiko.

Dad-of-two Albi Rozafa got to know Ryan and the showbiz Thomas family when his family first opened their restaurant in Stockport, and they continued to support him when he branched out to Manchester. Albi said: “Ryan, Gary and Matt, they’ve been like family to me for the past 20 years.

“They’ve always supported me, and it’s like a home from home for them in the restaurant here. I told them about making the awards final, but I didn’t expect them to turn up for it so I was amazed when they were there on the night.

“After we won the Manchester heat we didn’t expect anything more than that, but to then be nominated for the national award was incredible. I thought there’s no chance we are going to win.

“As a family business it’s hard to compete with the bigger restaurants so we’re stunned. We still can’t quite believe it.

“When we were announced winner, I think the guys were even more happier than me with their reaction! It was so nice.”

Ever the jokers, Ryan and Gary played a trick on model Matt by telling him it was a black tie function, when it wasn’t. But Matt saw the funny side and proudly cheered on his pal in his best bib and tucker.

He said: “Little trip out to the English Business Awards to watch my boy Alban win best restaurant in the UK. So proud of you son.”

The England’s Business Awards are based on customer nominations as well as mystery shoppers who test out nominated venues. The winners are then decided based on the best food and service.

Rozafa competed against regional winners from the Midlands, South East and South West to take the national prize. Albi’s family have a long tradition in restaurants, and he credits his parents and grandparents with passing on the authentic dishes from their homeland.