James Martin is a celebrity chef who many will know for his Saturday morning show on ITV. As well as answering viewers’ culinary questions, the chef today demonstrated how to make a quick and easy rhubarb crumble cake.

Firstly, James showed viewers which ingredients they should use to make the cake.

Laid out in front of him, the chef had the ingredients for a classic cake mixture: butter, flour, eggs, and sugar.

He also, of course, had fresh rhubarb, grown and hand-picked locally in the UK.

James said that rhubarb, as well as oranges, are “bang in season” right now, therefore it is the perfect time to cook with them. 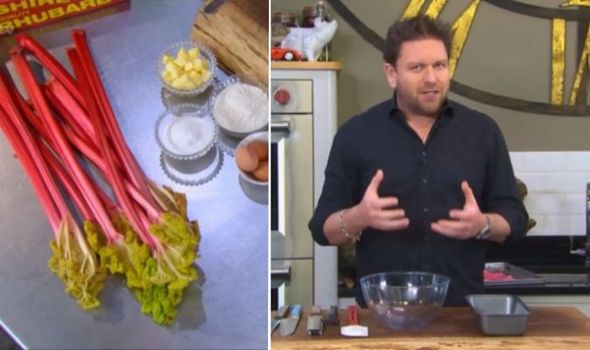 James had a few oranges to be able to squeeze the zest out of them, and powdered ginger, double cream, and syrup were also ready and waiting – completing the list of ingredients needed for this special recipe.

The first thing James did was chop the rhubarb up into small pieces and place them on a baking tray.

He said that rhubarb can be used for both “savoury and sweet” dishes.

The chef sprinkled a drop of water on the rhubarb, as well as a few squeezes of juice from an orange.

Then, he put the baking tray in the oven to roast the rhubarb for around 10 minutes.

While the rhubarb was roasting, the chef turned his attention to the cake mixture.

He put butter and sugar in a bowl and mixed it well with an electric whisk.

James then added the eggs, one at a time, to the butter and sugar, before adding the flour.

He recommended mixing the flour with the other ingredients by hand, before then adding the ginger and syrup. 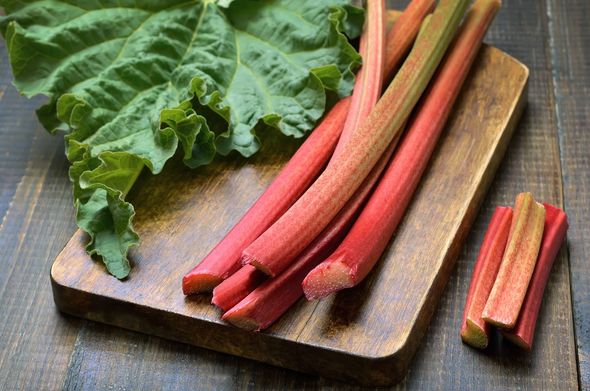 For the crumble, which will be used as the cake’s topping, James put flour, butter, sugar, and ginger in a bowl and rubbed them together using his fingers.

He broke the mixture into chunky, crumbling pieces.

Next, he reached for a cake tin and laid some greaseproof paper on the bottom of it.

“Get into the habit of using paper like this,” James said.

The rhubarb was by now roasted, and he put the chopped pieces in the tin, before laying the cake mixture on top of them.

Next, the chef topped the mixture with the crumble.

“You have the best of both worlds here,” James said, referring to the cake and the crumble.

He recommended turning the oven on to 160 to 180 degrees and baking the cake for around 45 minutes to an hour.

James reached for a crumble cake that he had already prepared to show viewers the finished product.

To serve the cake, the chef advised sprinkling some icing sugar on the top and adding a few chunks of rhubarb on the side of the plate, along with a dollop of cream.

To make the cream, James softly whipped double cream in a bowl and added syrup and ginger to it for flavour.