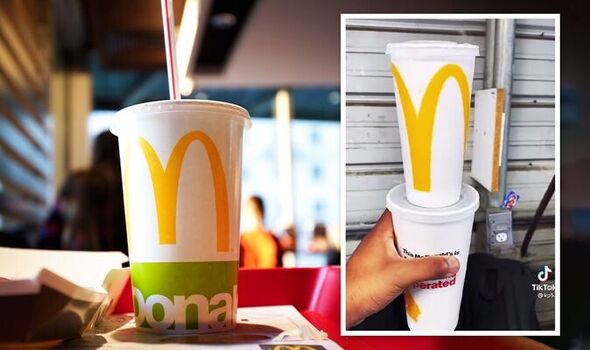 If you’ve ever collected a large order from McDonald’s you will know the struggle of trying to carry multiple meals along with your drinks. According to a TikTok hack, however, McDonald’s cups are actually designed so they can be stacked without the risk of spillage.

TikTok user Kyler discovered the hack which was then shared with an audience of 1.16k subscribers by the YouTube channel TikTok Foodies.

The hack, which was detailed by the car enthusiast on the social media platform, has had over 200K views and 11K “likes” on the app.

In the video, the man said: “I was today years old when I found this out about McDonald’s. So you’re carrying too much stuff and you don’t have enough hands and you need to carry a drink? The bottom locks into the top and you carry it.”

The McDonald’s customer shows how the grooves on cup lids are perfectly placed to allow the bottom of another cup to be slotted in.

These then lock together so that you can carry one drink on top of another without the risk of spillage.

The TikToker’s video was inundated with comments. “Whhhhaaaattt,” one commented, while another simply said “mind blown”.

Another said: “Omg me over here carrying them and sometimes spills on me until I told this on TikTok.”

Another added: “I never knew that but I’ve always carried it like that because of the no hands part.”

As well as the grooves for stacking drinks, you may have also noticed your McDonald’s cups have “buttons” on them.

After being left baffled by what these meant, a customer took to Reddit to find out why certain buttons are pushed in on certain drinks. The buttons on the lid are labelled ‘Diet/Light’, ‘No Caff’, ‘one’ and ‘two’.

Posting to Reddit, the customer wrote: “My question is about the McDonald’s drink lids which have the ‘buttons’ on them. I just ordered two drinks, one diet coke and one coke classic, and on one of them had the number ‘one’ button pressed.

“The buttons are the numbers one and two, no caff, diet/light. The only one pressed was the number one. Which one is diet? Should they have just pushed the diet one in?” [SIC]

McDonald’s employees were quick to come forward and explain the significance of these markings.

One worker said: “Yeah seems to be different for every store but we usually just push one random button for Diet Coke and then either two random or all four buttons for Coke Zero.

“It’s just faster to push random buttons than spend the time to actually find the diet button on every lid I guess.”

A second confirmed this, saying: “Procedure is any one for diet and two next to each other for zero.”