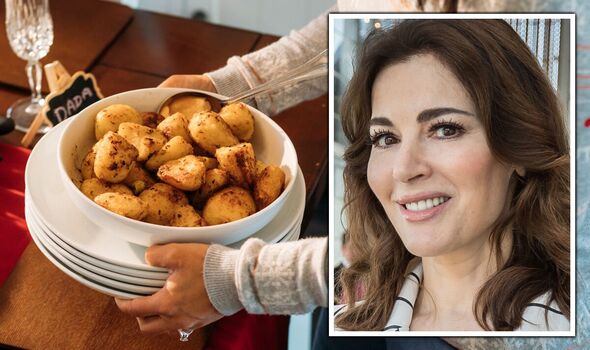 The well-known celebrity chef explained that along with most of the country, she will also be cutting back on the festivities this year. In a recent episode of The News Agents podcast, Nigella told the hosts that while people do want to “feel like they’re having something special” for Christmas lunch, the idea that adding “more and more” in a bid to make it better than an ordinary meal is simply untrue. And it’s not just the food that the TV cook will keep simple on December 25, with the esteemed writer noting that presents are also off the cards.

She told podcast hosts Emily Maitlis and Jon Sopel that while she “loves eating”, using Christmas as an excuse to eat non-stop to the point where you are beyond full – or as she put it, “a bloated wreck”, should be avoided.

Nigella added that the “obscene over-indulgence” many Britons are guilty of over the festive period takes away the appreciation of the staple foods that “make it into a feast anyway”, such as roast potatoes which she branded “the most important part”.

According to the TV cook, there are a few easy ways to enjoy a special, yet frugal Christmas dinner, one of which is to ditch the starters. She noted that the idea “seems a madness”, and is something she has never served on December 25.

Ignoring the custom to serve more than one meat at the table was another tip from Nigella who suggested focusing on the side dishes that complete the meal instead.

When it comes to stocking up on puddings and buying enough food to graze on throughout the day, the celebrity chef warned that a mistake many people make is using the leftovers too quickly.

Nigella told the podcast hosts that one of the best things about Christmas lunch is that it “yields leftovers”, and that they should be saved for the days that follow December 25, rather than consumed in the hours after serving the lunch.

As well as keeping her festive menu simple, the food writer has also decided against gifts in a bid to avoid wasting money on things people “don’t need”.

She said: “I certainly feel I am not interested, this year, in buying people who don’t need things presents.”

As an alternative festive offering, Nigella suggested gifting a card to say “I’ve donated in your name in lieu of a Christmas present”, to feel like you’re still doing something.

To mark the occasion, the celebrity chef explained that you can make food the main event. She said: “Celebrating food with your family is something we all, if we can do, should do and do it gratefully.”

Some of Nigella’s favourite dishes to serve at Christmas include family recipes such as her mother’s bread sauce, no-knead black bread and of course, turkey.

Her turkey recipe – as featured in Nigella Christmas, is described as “spiced and super-juicy” thanks to the brine.

She explained that the salty liquid tenderises and “adds subtle spiciness” to the meat, while also making it much easier to carve.

To replicate the cook’s famous festive turkey for a party of 8-12 people, you will need:

Put the water into your largest cooking pot or a clean bucket and squeeze the juice from the orange quarters into the water. Add the husks along with all the other ingredients. Remove any string or trussing from the turkey, shake it free, remove the giblets, if not already done, and put them in the fridge.

Lower the bird to the liquid, topping it up with more water to completely submerge it. Keep covered near an open window overnight before you cook it, remembering to take it out of its liquid 1-2 hours before it has to go into the oven. Check the cooking time for the weight of the turkey and preheat the oven to 200C/180C Fan/gas mark six.

Melt the goose fat (or butter) and maple syrup together slowly over low heat and paint the turkey with the glaze before roasting in the oven, basting periodically throughout the cooking time. Roast for 2.5  hours – or adjust accordingly based on the weight.

When you think it’s ready, pierce the turkey with the point of a sharp knife where the body meets the leg, and if the juices run clear, it’s cooked; if still pink, cook it for longer until they run clear, or use a meat thermometer to check it is at least 74C inside. Take the turkey out of the oven, and let it sit, tented with foil, for 20–40 minutes or even longer if you like, as Nigella does.