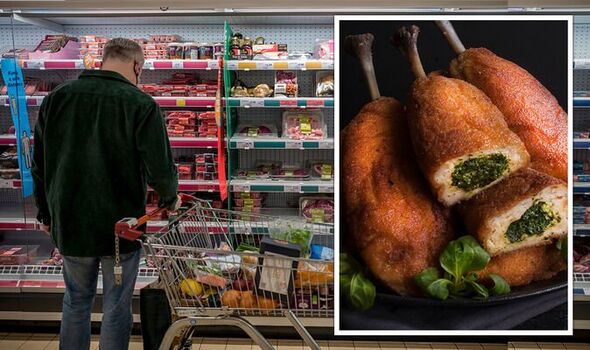 Sainsbury’s is the first supermarket in the UK to change the name of its chicken kiev. The retailer has also removed all Russian products from its shelves.

The supermarket said new packaging will be rolled out in the next few weeks.

The move comes after a social media campaign called on major retailers to change the name of the chicken dish.

The change aims to support the country as Kyiv is the spelling of Ukraine’s capital from the Ukrainian language name Київ.

Kiev, on the other hand, is the Russian spelling.

The supermarket also removed all its Russian products from its shelves, including Russian vodka.

Sainsbury’s said: “We stand united with the people of Ukraine.

“We have reviewed our product range and have decided to remove from sale all products that are 100 percent sourced from Russia.

“This means that from today we will no longer sell two products.

The supermarket also donated £2million to Comic Relief to support Ukrainians affected by the war.

A total of 1.25 million people have fled Ukraine since Russia invaded the country last week, the UN’s International Organisation for Migration has estimated.

Many other companies have suspended trading in Russia since the start of the war.

Co-op and Morrisons have also removed Russian vodka from its shelves.

Marks & Spencer announced it has suspended shipments to the stores in Russia, “given the unfolding humanitarian crisis” in Ukraine.

However, they said they would not be changing the name of chicken kievs.

The supermarket commented on the issue.

“Marks & Spencer will always use the Kyiv spelling whenever and wherever we are talking about the Ukrainian city,” a spokesperson said.

“‘Chicken kiev’ has been in use for over 100 years and has been recognised by our customers since M&S brought the product to the high street in the 1970s.”