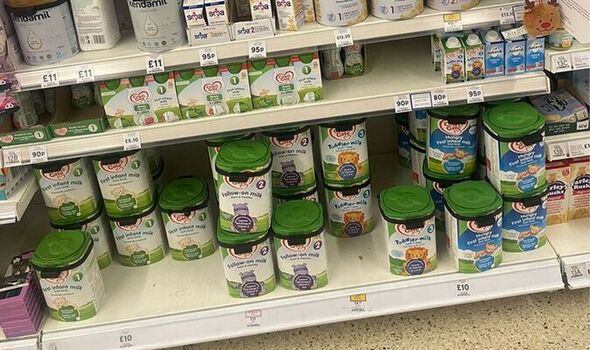 Reports have emerged of security tags being put on tins of baby milk at a Tesco store in a bid to thwart would-be thieves.

The security measures were spotted at the Welsh supermarket this week.

In May this year, North Wales Live reported how desperate customers struggling with the cost of living crisis were stealing everyday items. It had even got to the point where baby milk was being security tagged, said a supermarket worker at a Flintshire store.

She was speaking to the Guardian and said shoppers’ habits were changing as household budgets came under increasing pressure, with the average person “spending less and people were always complaining about prices at the checkout”, she said.

Speaking at the time, Jane said: “Some people know when [the store] puts out reductions. They come to the store at 8pm and you can see crowds of people at the reductions counter climbing over each other to get what’s cheap. When there is something in the aisles that is on offer, people buy what’s cheap that week and don’t have it the next.

“We used to get shoplifters stealing high-value things to sell on, which is not uncommon. Now it’s people stealing everyday things, doing their weekly shop and trying to walk out without paying.

“Baby milk has never been security tagged but now it is, so people can’t steal it. It was something that never would happen before but people are quite desperate.

“There is a lot going [missing] through self-service: people not scanning everything is more prevalent than it was. There are definitely a number of things that never had security tags before but have got them now.”

Jane said many items had been removed from shelves and into secure areas, with cards put out in their place. Customers were also asking cashiers to stop at £40 and are prioritising what they need at the front of the conveyor, with many items left at the end of checkouts.

“It is not a new thing but it is definitely happening more with people who didn’t generally bother before and were carefree and just buying what they needed or wanted. Now people are very cautious about cost,” she said.