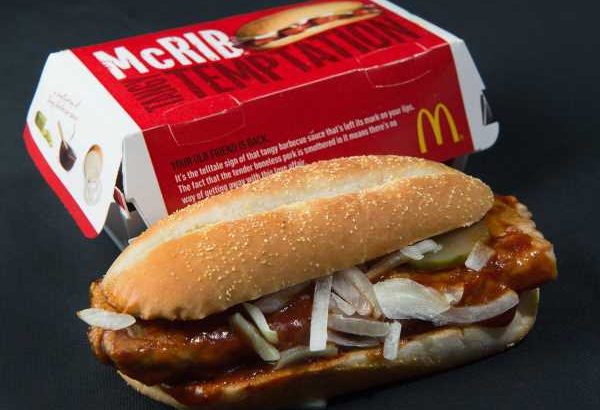 It comes but once a year, if that. Fans ruthlessly scour the internet for rumors  and pore over store locations to get their hands on one before anyone else. And you can bet people are willing to wait in line for it. I’m not talking about Apple fanboys hunting down a new iPhone, but the McDonald’s McRib.

And just in time for (but not related to) the iPhone 11 launch, one of the strangest fast food menu items with the most inexplicable cult following makes its triumphant return. Like salmon swimming upstream to spawn, this pork sandwich that McDonald’s describes as “slathered in a tangy barbecue sauce and topped with slivered onions and tart pickles” will be available at participating locations for a limited time. Chewboom reports that it’s been sold for $3.69 on its own, as part of a combo for $5.69, or available in a special two for $6 deal.

This year, it seems like devoted fans likely won’t have to travel quite as far to get their hands on the sandwich that’s popped up intermittently since debuting in 1981. That’s because McDonald’s is bringing the McRib to more than 10,000 locations nationwide in 2019, up from about 9,000 last year.

That should be welcome news to many, given how much buzz the McRib’s return has already generated on social media:

Starting on Monday, October 7, you can get your hands on McD’s signature take on BBQ when the McRib re-debuts. Instead of relying on social media or internet hearsay, you can figure out where the McRib is by going straight to the source: just punch in your zip code at the McRib finder and McDonald’s will steer you in the right direction.

That should probably help those of you who enjoy the McRib figure out how you can stockpile enough of those saucy pork patties to make it through the next year. In the meantime, hopefully this isn’t a pork-baked version of the Popeye’s chicken sandwich fiasco.