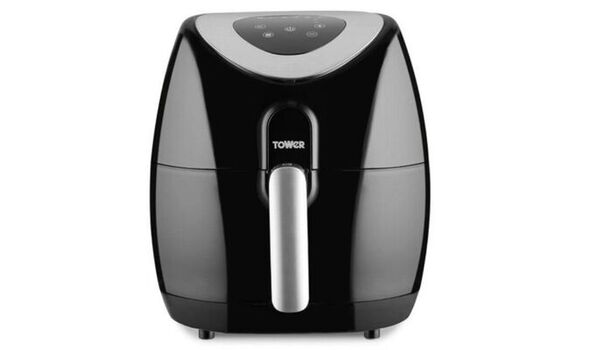 With the cost of living crisis continuing to bite hard, many households are looking for ways to save money on their energy bills.

Hundreds of thousands of people have been ditching the oven in favour of air fryers to keep energy bills down, but do they really work?

Iceland encouraged everyone to pledge to turn off their ovens for a week and use an air fryer instead—the Big Cooker Switch Off Challenge.

Reach reporter Neil Shaw decided to give it a go. Here is how he got on:

“We stuck to a 4L Tower air fryer, the same unit Iceland has been selling for £35.

“While avoiding anything gas-powered, we did also use the microwave, kettle, toaster, and a Ninja Foodi to tackle anything we didn’t think the Tower air fryer would handle.

“The idea was to see if we could cook for a family without an oven and what the result would be in terms of cost.

“The headline figures seem to speak for themselves.

“In the month before the experiment, we used an average of 89p of gas and £3.59 of electricity a day.

“We also plugged a monitoring device into the Tower air fryer to see how much it was actually using.

“So in short, the air fryer cooked all the meals for our family (three people) for six days for £1.20.

“The results come because an air fryer is a much more efficient way of cooking.

“4litres is a fairly small capacity compared to the 60ish the average even holds – so that means there is a much smaller space to heat up.

“The circulating hot air cooks the food quickly and efficiently without having to heat up a lot of empty space. Hence, cheaper.

“But does it really do the job?

“On day one we tried home-made chips.

“It seems to be what everyone uses an air fryer for, so we chopped up the potatoes, washed and dried the chips, tossed them in about half a teaspoon of oil and put them in the fryer.

“25 minutes at 180C – stopping the dryer to toss the chips a couple of times – and they were almost done.

“They needed a few minutes, and the result was good.

“There was plenty of room for enough chips to feed three of us, and it could have even fed a couple more people.

“With a little experimentation with timings, temperatures etc I think we’d get a great result.

“Through the week we then tried a few different things to see how the air fryer would tackle them.

“Oven chips came out much better than they do in the conventional oven – seriously, the best oven chips.

“I’m not usually a fan, they just never seem to work, but the air fryer does them well – and fast!

“Iceland does a range of Greggs bakes, slices and sausage rolls which seem to work really well in the air fryer – chuck them in for about 20ish minutes and they make a great lunch snack.

“A bit of experimentation, and not expecting great results, we tried making banana muffins – the result was really good. Delicious cakes, perfectly cooked.

“We’ll definitely be using the air fryer to make more cakes and desserts to see what happens.

“Another thing we didn’t expect to work was a pasta bake – so we gave it a try.

“A bowl filled with dry pasta and we mixed in a tomato sauce then put it in the fryer.

“After 20 minutes it was clear the fryer was too hot so we turned it down. Then chucked some cheese on top and put it back in. The end result was pretty good.

“The pasta could have done with another five minutes to soften up, but the sauce was hot and the cheese on top was perfect.

“If you search online people will generally tell you not to try cooking anything with a lot of sauce in an air fryer but this worked, and didn’t make a mess – so we will experiment and try to get the timings better next time.

“If you’re looking to grill something like burgers or sausages there is a grill plate that helps with that and drains off the fat.

“And for Sunday roast, you can put a meat joint in there – just make sure it cooks all the way through – or one ideal option is Iceland’s frozen cuts of meat.

“They come in at three for 10 pounds in the freezers – pork, chicken, gammon, turkey.

“They say they’re enough for two but you can definitely stretch them to four – and they seem to work in an air fryer as well as they do in a conventional oven.

“Overall, the savings speak for themselves.

“We ran the air fryer through a good range of tests in the days of the experiment – roasts to cakes, bakes to frozen food, meat and veg. It handled them all.

“Frozen food is its forte – but it will also handle anything you cook from scratch as our meals showed – with a little bit of thought and planning.

“If you’re going to invest in an air fryer for a family bigger than four – or if you genuinely plan to try to use it for everything, you’re probably going to want something bigger than a 4L.

“But if there are 3-4 of you, the standard size air fryer will tackle most of what you throw at it.

“With the muffins, for example, we could get five in the 4L air fryer to cook.

“But with the chips, oven chips, jacket potatoes and a few other things we could definitely have made enough to feed 4/5 people at once.

“You’re still going to want a hob to boil/steam any veg as well as cooking things like rice and pasta.

“And if you don’t have a Foodi or something similar you’ll probably be using your hob for frying and for making things like Bolognese, curry or chilli.

“But for baking, roasting, grilling etc the air fryer will take it all on.

“If there’s something you want to make in an air fryer just Google it – chances are you will find someone has come up with a recipe.

“Iceland has a lot of ideas on its recently launched blog Afoodable.

“There are recipes for halloumi burgers, a full English and a Sunday roast on there.

“When it comes to a big meal – such as a Sunday roast or Christmas dinner – you’ll probably find it more efficient to get everything in a large oven at once.

“But for an average meal, there is no need to heat up a whole oven to tackle what the air fryer will handle at a much lower cost.

“Trying to get an air fryer to do everything for a few days was great fun – and generally worked!

“In the real world, you’re going to need your hob to make sure there are plenty of fresh veggies in your diet, as well as for putting together some meals like stir fries and curries.

“An air fryer won’t solve all your problems, or cook all your meals, but it is a fantastic addition to your kitchen.

“For everyday, for feeding the average family, an air fryer looks like it will save you significant amounts of money and will be put to use as often as you want it to be.

“This is definitely one of those hacks that actually seems to work, and the initial outlay should pay for itself quickly.”