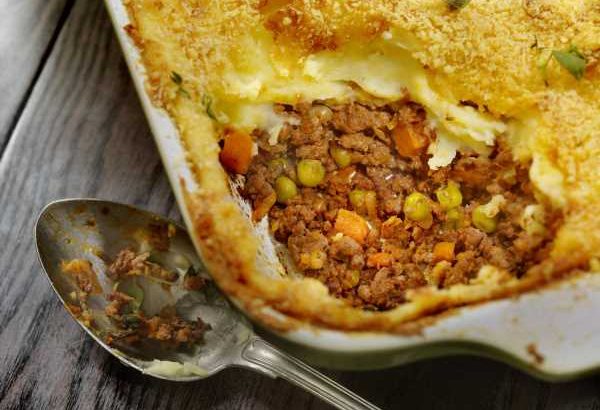 Shepherd’s pie is a lot of things: delicious, comforting, and easy (and cheap) to make. But what exactly is the iconic Irish dish—and is it the same thing as cottage pie?

What Is Shepherd’s Pie?

A shepherd’s pie is a savory pie made with minced meat and topped with a layer of mashed potatoes.

The filling for the dish is typically cooked in a gravy with onions, peas, celery, and/or carrots.

“Shepherd’s pie” and “cottage pie” are often used interchangeably, though they’re not the same thing.

Aside from its deep Irish roots, we don’t know much about shepherd’s pie’s exact origins.

Legend has it that the dish was invented by frugal housewives sometime in the 18th- or 19th-centuries.

The shepherd’s pie is supposedly a product of that frugality: Instead of wastefully throwing food in the trash, the penny-pinching cooks threw all their leftovers into one dish and called it a day.

Here’s what we do know for sure:

Cottage pie was actually a thing before its lamb-filled counterpart.

It came about around the same time potatoes, which were affordable for peasants who often lived in cottages, were introduced to the U.K. The dish became a staple in peasant households, and that’s how it got its name.

Though you’re likely most familiar with the standard Irish shepherd’s pie, you may not know about the plenty of variants that exist across the globe:

How to Make Shepherd’s Pie

The beauty of shepherd’s pie is that it’s incredibly easy to make. Since it’s just a mishmash of different ingredients, you’ve got a lot of leeway when it comes to preparation.

To make the most traditional shepherd’s pie possible, line a pie pan (bottom and all sides) with mashed potatoes, add a minced or ground lamb and vegetable mix, then top with more mashed potatoes and bake.

Modern versions of the iconic dish vary widely, from the addition of homemade or store-bought pie crusts to diet-friendly options (like this Keto Shepherd’s Pie).

Try one of our favorite twists on the classic meat pie: