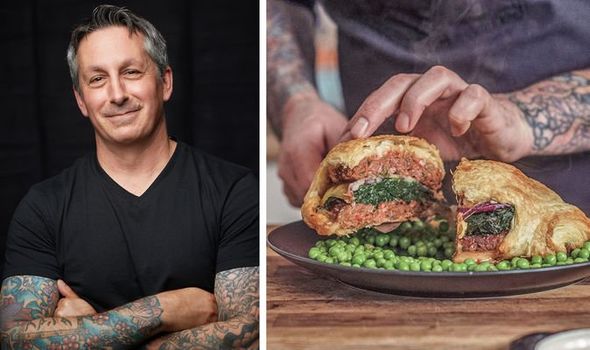 A growing number of people are choosing to reduce or eliminate animal products in their diet. As a result, a larger selection of plant-based options are available at supermarkets, restaurants, public events and fast food chains. Over the past few years, the demand for vegan and plant-based recipes and alternatives have also increase, but it can be hard navigating a nutritional meat-free diet. Express.co.uk spoke exclusively to Derek Sarno, co-founder of Wicked Healthy and Tesco’s Executive Chef and Director of Plant-Based innovation about plant-based foods and the benefits that come with not eating meat. He also shared a great meat-free burger recipe both meat and non-meat lovers will enjoy.

Explaining Wicked Healthy’s mission and why he and brother Chad Sarno set it up, Derek said: “We do it for the animals, for our health, for the environment, and for the taste! There are so many good reasons.

“Basically, everyone should be eating more veg and Wicked Healthy shows how to do it with recipes and inspiration while Wicked Kitchen provides the platform with products that makes it easier than ever.

“We know most people just want great-tasting food so that’s our focus.

“We make plant foods taste so good that there’s no reason not to eat them. Just look at our Wicked mushroom steaks. They are designed to appeal to meat eaters. They’re chewy, meaty, savoury, satisfying…just talking about them makes me want to grab a knife and fork and eat one right now!

“Our mission is basically to get people eating more plants,” he added.

So what are the benefits to reducing meat from your diet and choose more plant-based alternatives?

Derek explained: “Financial…that’s a good one, actually. Have you seen meat prices lately? A decent ribeye steak costs £18 per kilogram. Vegetables are much cheaper.

“And the health benefits of eating plant-based are well-known. Almost every major health organisation agrees that we should all be eating more veg.

“And the environment gets some major relief when you eat this way. Have you seen the new UN climate change report that just came out last month?

“The last report was from 2013. That report estimated that food systems, including everything from agriculture to food waste, account for about 11 percent of greenhouse gas emissions.

“But the new report with more accurate data shows that our food is responsible for 25 to 30 percent of emissions. That’s nearly a third!

“And guess which food is the worst offender? Meat production,” he remarked.

“The latest UN report singles out meat as ‘single food with the greatest impact on the environment.’

“So, yes, eating less meat and eating more veg can definitely help the effort to keep climate change from getting totally out of control,” Derek said.

Derek gave up meat a long time ago, but what was the hardest thing part?

“Burgers,” he commented. “I probably gave those up last. But that was years ago.

“Plant-based burgers have come a long way since then. There are so many great tasting options now.

“If you like burgers, check out some of the burgers on WickedHealthy.com. They’re fully loaded, over the top, super delicious plant-based burgers.”

With the “best vegan burger hack” included, the Vegan Wellington Cheeseburger is described as “an amazing wow-factor centrepiece” which is “deceivingly easy” to make and elevates Wicked Kitchen Jalapeño Burgers.

2. In a hot skillet add a tsp of oil and both burgers, cook on each side for two minutes and remove from heat.

3. In the same pan add the baby spinach and cook for one to two minutes until wilted, remove and place spinach in a strainer to allow excess liquid to run off. Let spinach cool for a few minutes and then squeeze out excess water this will help avoid being soggy.

4. On the cutting board, roll out puff pastry, cut off a couple of inches so it’s squared and will completely wrap the wellington. Place one cheese slice in the middle then the burger and layer with one slice of cheese, sliced onion and squeezed spinach. Then top with a second burger and sliced cheese.

5. Begin to wrap pastry from one side and then the other and close the gaps on the other sides to enclose the layered burgers. Cut off excess pastry if needed.

8. For the Sauce, in a small bowl add ½ mustard sauce and ½ Oatly Crème Fraiche and whisk together, simple.

9. Remove Wellington from the oven and allow to cool for five to eight minutes before slicing.

Substitutions: Feel free to use Dijon or any spicy mustard or Sriracha mixed with mayo as the sauce works great!

Derek Sarno is a chef on a mission to help you make wicked delicious food vegan.

You may have tasted some of his miraculous work with mushrooms.

For many years, he was the Senior Global Executive Chef at Whole Foods Market and ran several successful restaurants.

Derek has also been known to train squirrels.