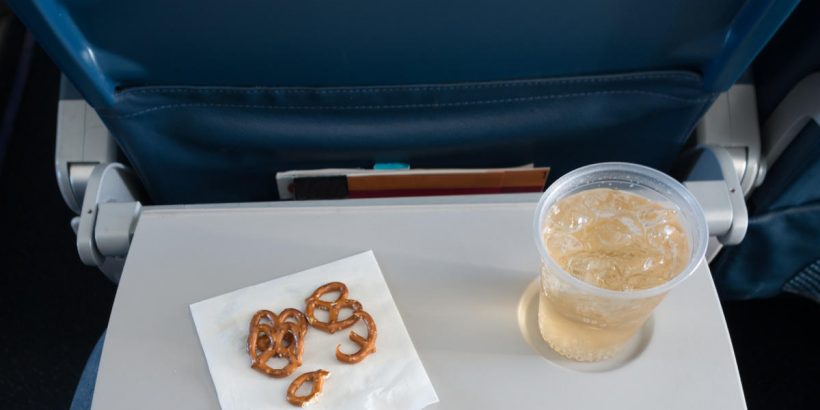 Listen: We’re not complaining about airplanes. People like to whine about layovers, flight delays, and rude passengers as if they are not flying through the air at unimaginable speeds like a freaking bird with superpowers. It’s annoying when people act like that’s not amazing, and we’re not doing that.

But, if we’re being totally honest, the food and beverages that flight attendants dole out leave something to be desired.

There are a few things you can do to make your next flight a much tastier experience, though.

Pack Your Own Snacks and Flavor Enhancers

If you don’t mind being the weirdo who pulls shredded cheese and lemon wedges out of their pockets on a flight, you can easily improve the taste of bland airline food. Hot sauce, spices, and condiments are all fair game (as long as they’re in appropriately sized bottles) to bring on a flight. Go crazy—the sky’s the limit.

While you’re packing your bags, you may want to include a healthy snack or two. Some people are prone to swelling at high altitudes, and the salty foods you get on airplanes (like peanuts and pretzels) are definitely no help.

Never Order Ice—and How to Avoid Other Hidden Germs

There’s no way around it: Airplanes are germy places. Flight attendants say that the ice in your cocktail is one of the worst (i.e. dirtiest) offenders. The ice trays aren’t washed that often and, to make matters worse, many flight attendants don’t have time to wash their hands before scooping the ice for your drink.

“Between ice scoops, I’ll probably touch a seat, a Coke can, my tablet to charge someone for a drink, their credit card, a tray table and the car,” an unnamed flight attendant said to MarketWatch. “So basically my hand snatches up all those lovely germs and then goes back into the ice drawer to pick the scoop back up and do it all again.”

It’s also a good idea to bring an antibacterial cloth aboard the plane to wipe down your tray table. Who knows what kind of creepy, crawly germs the person before you left behind.

Bring your own booze (in mini bottles) to avoid the hefty price tags that come with in-flight cocktails. Shockingly, this isn’t technically against the rules. However, you’re not allowed to pour the drinks yourself. Hand them to the flight attendant when you board the plane—they’ll dispense them throughout the flight.

If you’re picky about your alcoholic beverages, order a double with a mixer on the side. That way you can mix your drink however you like it, and you leisurely sip it until the next time attendant comes around.