When you’re watching on TV, you see the people behind them holding up really fancy scorecards, just flipping over the number of hot dogs. But those people are watching us. As the thing is going on, you really are the main counters for this thing. I quickly went from “I am not qualified to do this,” to “I’m going to cause a scandal. I’m going to be the most hated person in the hot dog world. If I ever go to get a hot dog somewhere, they’re going to be like, “That’s the guy who robbed someone of the title.'” The prize is $10,000—there are very real stakes! 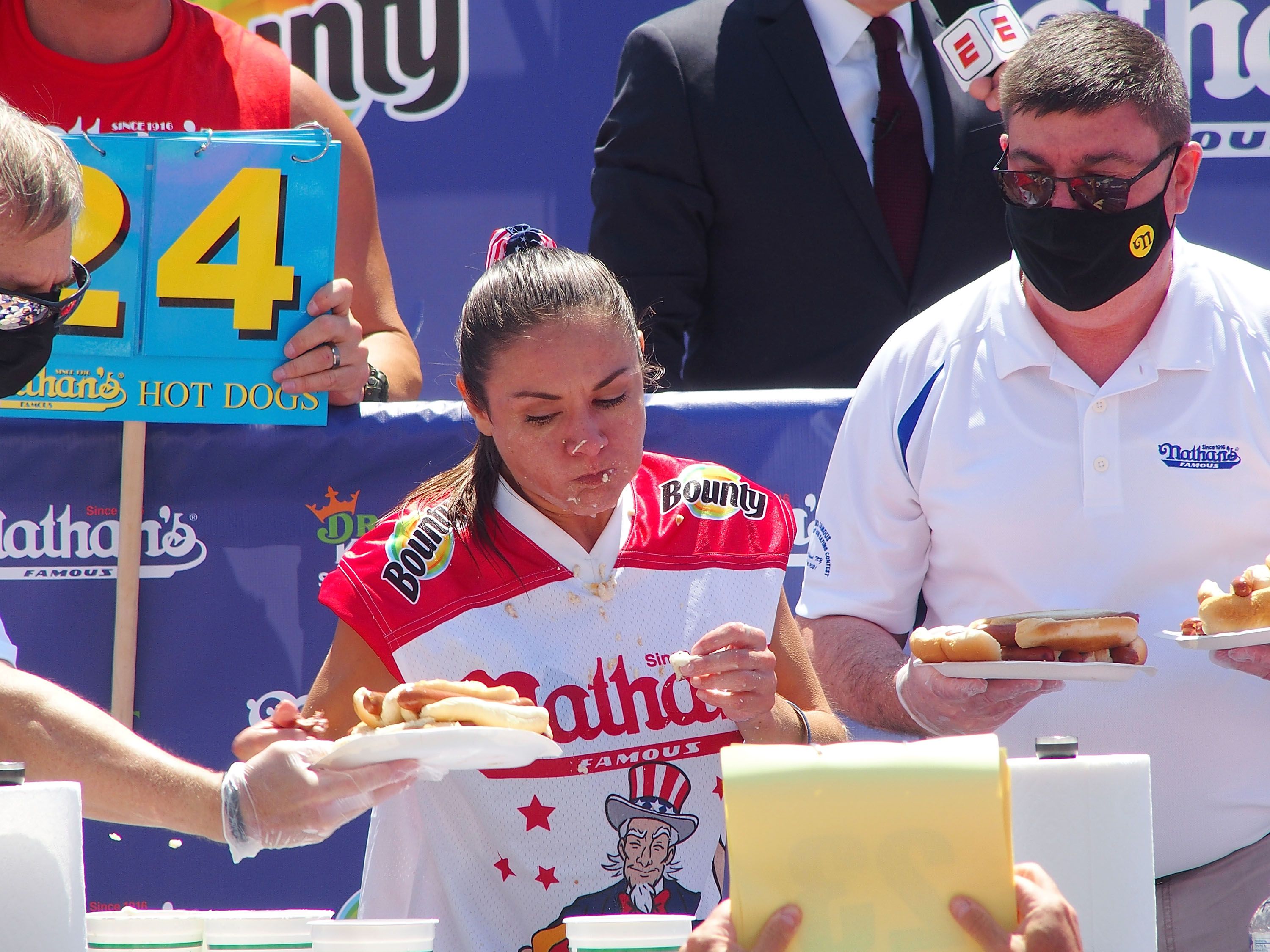 The 10 minutes of actual competition are intense. The competitors are eating so fast it’s hard to keep track. They separate the hot dog and the bun…because the hot dog is hard and the bun is soft, plus they dip the bun in water. So they’ll have a bun, and they’re holding the hot dog in their fist, and you can’t really see it, and the bun’s kind of dropping, and they have to pick it up and eat it.
Pro tip for keeping track: There are five hot dogs per plate. So if you start to get off track, you can look at empty plates. There are also a couple of judges roam on stage and they’ll ensure you stay on course. We were down (or up one or two) throughout the sessions, but we ended up in the right place.
There are three main takeaways from my day as a judge. Firstly, [the competition] is gross. It is disgusting, and it’s way messier when you’re actually there. It’s called a “reversal” if a contestant regurgitates. They can’t do that or they’re disqualified. No one had a reversal this year, but one of the contestants actually said, “Watch out for spray.” That’s just as they’re dipping stuff in water, and shoving these things in, there are bits flying around that can get on you, especially as a judge who is sitting right in front of them.
Putting the grossness aside, you can see standing right there looking at them that they are in pain. It is like any endurance event. The will to keep putting those things in your mouth and swallowthem is enormous. It is a testament to human endurance.
https://www.instagram.com/p/CQ7K349FEOQ/
A post shared by Bill Strickland (@truebs)
Thirdly—which I knew, but I really understood sitting there watching it—there is a lot of technique. I was right next to Joey Chestnut, who goes really, really hard for the first four minutes and gets a big lead. Then he settles in to maintain that lead and even will let people eat into it. Then there’s a big sprint in the last minute. In the last 30 seconds, he probably got down five hot dogs. He ended up setting the world record again. He’s, I don’t know, the Michael Jordan of hot dog eating! When he got up around 70, there was a judge next to me who fainted. It’s hot out there, but it’s also just really intense, and the crowd is screaming. “Someone swooned” over the number of hot dogs, is the way I’m describing it.
As for [2021’s female champion] Michelle Lesco, when I got my judging assignment and walked up, the first thing I thought was “Oh, she’s an athlete.” She was really graceful, really fast. She had only smooth movements. She had obviously just trained for how to get these things…I thought of her while watching one of the guys next to me, Gideon Oji. He was a college basketball player, and now he’s early into competitive eating. At the end of the competition, he had hot dog and bun all over himself—not Michelle. This was her year.
For what it’s worth, I…wouldn’t do this again. [Major League Eating] asked me to, and I was like, “You know what, I think just once for me.” It was amazing, but I think it would become a weird…Not to disparage the hot dog people.
But if you’d like to become a judge for the Nathan’s Hot Dog Eating Contest, what I would say is that it’s particularly accessible, which I also found intriguing. It’s not like I’m going to ever be a referee at the Super Bowl or an umpire the World series. But this is just about the World Championship, the biggest spectacle for competitive eating. If someone was really into this, I think if they wrote Nathan’s and Major League Eating, they’d have a shot. It’s amazing! There aren’t many things that are that accessible in this way. Like, who’s going to let you on the stage at a symphony, or whatever version of excellence you’re into?
A last note to anyone who’s considering judging. I’d thought, “I’ll judge this, the Nathan’s original stand is there, it’ll be fun and then I’ll go get a hot dog.” You’re…not going to want to eat a hot dog. You’re just not. 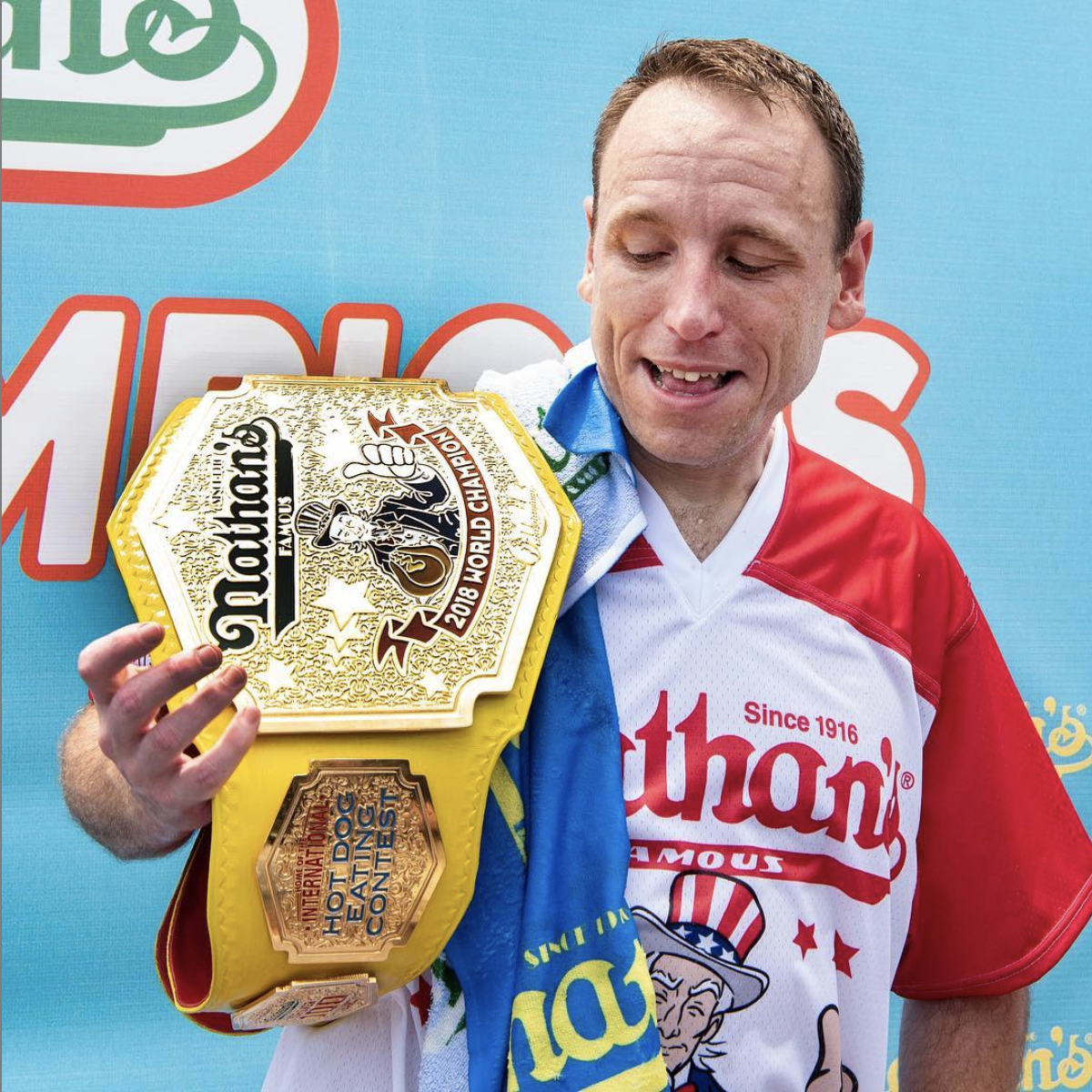 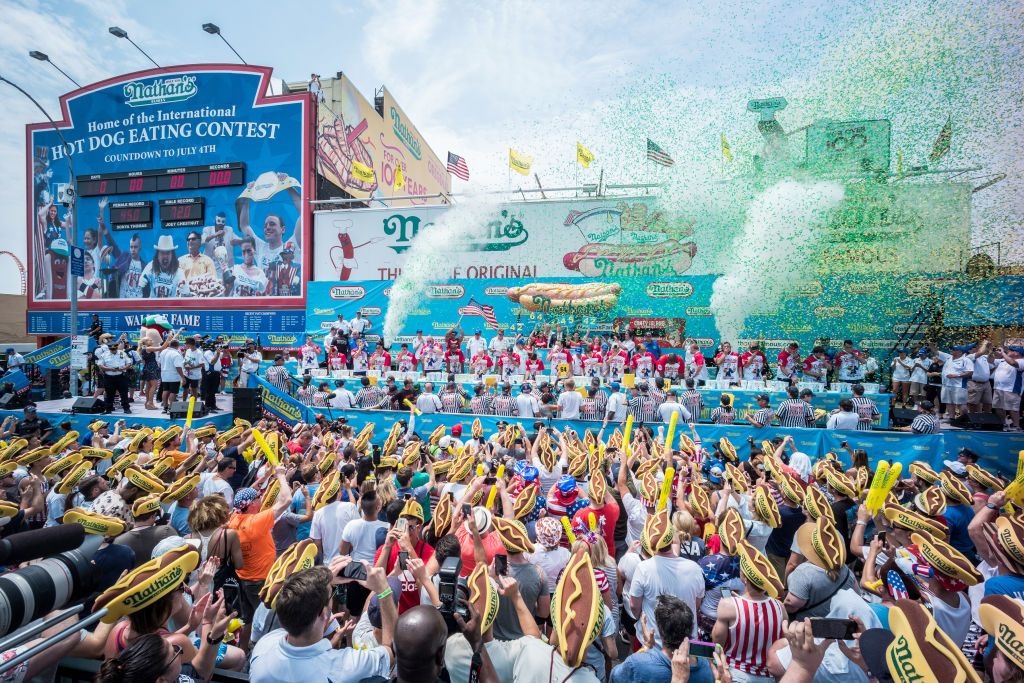