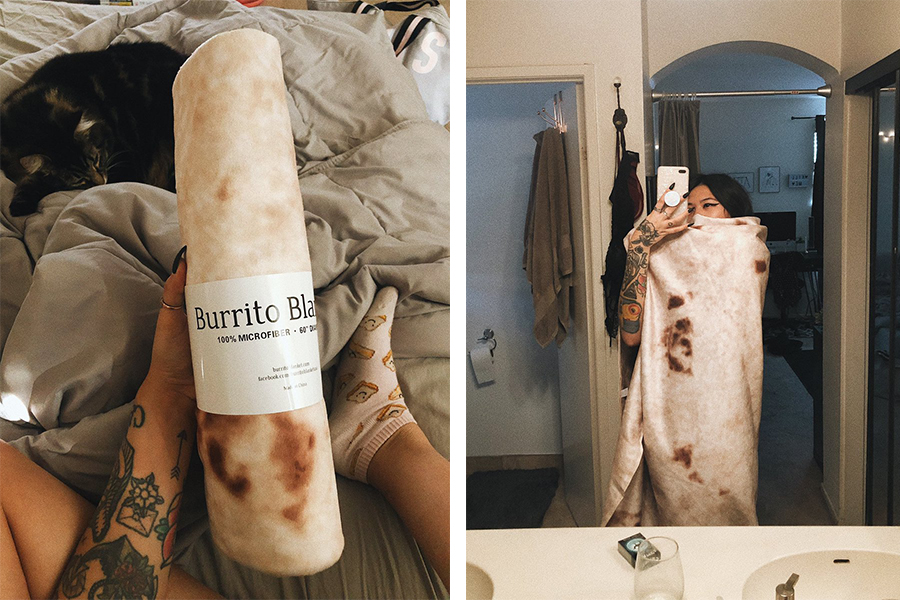 I think it was the famous father, donut lover, and American prophet Homer Simpson who said, “Mmm, I’m a toasty cinnamon bun,” while wrapped up in his bedsheets one morning. While that does sound delicious, when you do wrap yourself up in sheets like Homer did, you’re really more of a human burrito, right? That’s why I’m sure Homer would be the first in line (or online?) to buy the latest food-based item going viral: a literal burrito blanket.

Last week Twitter user @katreenawhh shared a trio of pictures that changed the face of relaxation forever — she introduced the world to the Burrito Blanket, which looks just like a giant flour tortilla.

Under the photographs, @katreenawhh says, “lmaoooo i just got home and this was inside a package addressed for me. amazing,” while modeling how realistic, adorable, and enormous the blanket is. As a result, her tweet went extremely viral, being retweeted 24,000 times and favorited 119,000 times in less than a week.

The Burrito Blanket (which really is a tortilla blanket unless it comes with ground beef and cheese, but I still love it) is really realistic: circular, made with plush microfiber and is pretty huge (as you can see) at five feet in diameter, so you can wrap yourself and also maybe an avocado or tomato pillow or two in it easily.

The blanket originally appeared on Big Cartel by company Zen Life, who sold their creation for $44.95 — and it’s already sold out. Zen Life has included a handy contact form on their website for customers who would like to be notified when the blanket comes back in stock, which Zen Life estimates to be late April or early May.

If you were really looking forward to wearing this as soon as possible, hoping to see the delivery guy’s face while accepting Seamless Mexican food delivery (which I’m totally going to be doing), you can find unofficial versions elsewhere, which have already been popping up, thanks to the blanket being a spectacular idea. A competing manufacturer of the blanket can be found on Etsy for three dollars less than on Zen Life, and as of this writing, there are only eight left of those, so people really can’t wait long to wrap this ode to corn masa around themselves, it seems.

You can buy this delightful homage to burritos from the original creators Zen Life on Amazon (in stock starting April 6), on Big Cartel (when it comes back into stock, of course), or the competing manufacturer via Etsy (while supplies last!)