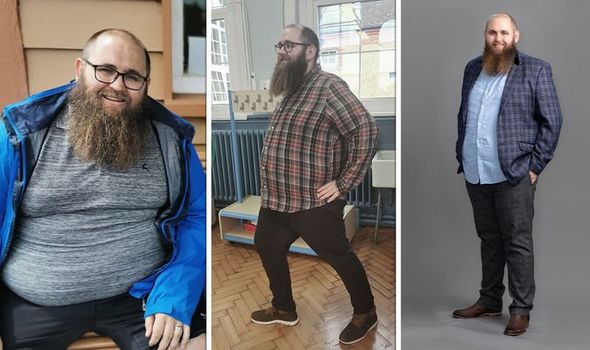 James used to get out of breath after playing football with his two children for a little while. He was 25 and a half stone when he realised he needed to lose weight.

James had tried restrictive calorie-counting diets over the past 10 years, with no success.

Despite compulsively counting the calories of all his meals, something many dieters do, he would always end up gaining weight and returning to his normal eating.

His wife suggested to him an NHS-backed low-carb healthy eating programme on which no food was banned.

Although he was sceptical at first, after just three months following the Second Nature diet plan, James lost more than four stone while eating “genuinely nice food”, and without counting a single calorie.

James explained: “My weight really ballooned at secondary school. In 2011, aged 26, I weighed 20 stone, so I decided to count calories.

“I have an obsessive all-or-nothing nature, so it suited me at the time.

“I would log everything on an app, restricting myself to 2,000 calories in the beginning, then down to 1,500 over about a six-month period.

“When my weight hit 15 stone, I was happy, so I started eating normally again for about a year to 18 months, and, of course, the weight piled on.

“That was the first big attempt to lose weight. And every attempt since, there have been four over the past 10 years, has involved calorie counting, losing a couple of stone, and then putting on all the weight I’d lost and more.”

James used to skip breakfast, have a sandwich for lunch, and eat spaghetti bolognaise for dinner as well as drinking a lot of coke, unhealthy snacks and “way too much beer”.

He now follows the non-restrictive diet combined with a healthy and balanced lifestyle.

James said: “At 25 and a half stone, everything was uncomfortable. Sitting on the floor and playing with my children wasn’t pleasant so I would avoid doing it or half-heartedly show interest, because I was embarrassed.

“Going to play football, not even taking many steps and being really out of breath was just horrible. I didn’t want to confront myself about my weight, I made a lot of excuses.

“Because I knew if I went back to calorie counting, I would feel exhausted, obsessing over everything I ate, and knowing that even if I lost weight, I would start putting it on again after I stopped.

“In just three months I’ve lost more than four stone in weight. I no longer get heartburn, I’ve stopped snoring, much to the pleasure of my wife, who has also lost more than a stone and a half just through eating the recipes with me.

“I’ve also reevaluated my drinking and have stopped for now,” he said.

James continued: “The best part is that my kids have a new version of their dad. I no longer wake up with a hangover at the weekend, so we spend more time together, and I now walk them to their swimming class. My losing weight has had such a positive effect on my relationship with them.

“My four year old who isn’t good at filtering himself has said ‘daddy, your tummy isn’t as fat as it was’. And my older son is now interested in what foods are healthy.”

“I will 100 percent never go back to calorie counting.

“I felt lethargic all the time – and guilty too if I ate the ‘wrong’ thing. Now all I think about is the simple process of meal planning and setting out the week. That’s the only time I have to think about what I’m eating for the week. It’s made us a happier family. I wish I could have started Second Nature 10 years ago.”