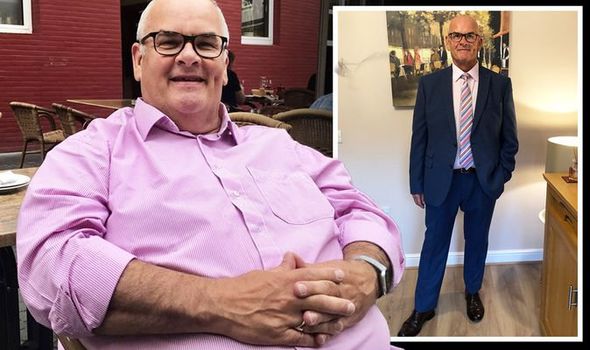 After a serious health condition threatened his life in 2018, Ken decided he needed to make major changes to his lifestyle to lose weight and become healthier. Since starting his weight loss journey, the retired police detective from Yorkshire has said he has been given “another chance at life”.

Ken is the organisation’s Man of the Year this year after losing an impressive nine stone after just 18 months.

The Englishman turned his life around after struggling with his health.

After reaching more than 23 stone when he became less active in his role as a police detective, Ken knew he had to do something about his weight.

He said: “I began to put on weight, but it appeared so gradual I failed to pay much attention to it, my job became more office based and semi-retired I found I had more time to eat out and socialise, I hadn’t realised just how unwell I was becoming.

“I used to love gardening and tinkering in the garage on old cars but I would get so breathless and struggle to get up from the floor that I started to lose interest in doing the things I loved the most.”

Ken’s weight was stopping him from enjoying day-to-day activities, and even holidays with his wife, Jeannette.

The couple took a trip to Scotland in 2018, which motivated Ken to make changes to his lifestyle.

A life-threatening health condition was also a catalyst.

The 62-year-old said: “When I look back on that trip to Scotland with Jeanette I felt like we missed out on so much because I was unable to walk far and enjoy the beautiful scenery.

“Then, the morning of our thirty-ninth wedding anniversary, I woke with a terrible pain in my calf, I decided to go for a walk to try and ease the pain but became so unwell I collapsed in the street.

“I had developed thrombosis which led to a pulmonary embolism. During my journey to hospital, I suffered a cardiac arrest and my heart stopped for ten minutes.

“Miraculously I survived my ordeal, but it took me over twelve months to fully recover mainly due to me being so overweight and unfit.

“I knew something had to change and inspired by one of my friends who had been successful at a local Slimming World group and spurred on by Jeanette I decided to give it a go.”

Since joining Slimming World in August 2019, Ken has lost a whopping amount of weight by changing his diet.

He realised that he could still eat his favourite foods, but prepared and cooked in a slightly different and healthier way.

Ken explained: “As nervous as I was the first time I walked into the group, I was met with the warmest welcome and soon started to look forward to Monday mornings.

“I’m a people person so engaging with like-minded people, sharing experiences, tips and recipes was brilliant and being able to enjoy all my favourite meals, like full English breakfast and chilli con carne, I never felt hungry or restricted.”

Having impacted both his physical and mental health, losing weight has changed Ken’s life for the better.

He said: “My weight had really affected my mobility and even the shortest walks had become such a challenge.

“Since losing weight I walk as much as possible, living in the countryside and near the sea means I can enjoy exploring lots of new places.

“I’ve found it’s had such a positive impact on my physical and mental wellbeing. I’ve also started enjoying all my favourite past times again, gardening and working on my cars in the garage.”

The 62-year-old added: “My whole life has changed over the past 18 months.

“Losing nine stone has given me a renewed sense of confidence, vigour and zest for life.

“Now I’m fully retired, fit and healthy and I can do things I only dreamed of a year ago. I’ve been given another chance at life and I feel like the man I was in my thirties.

“My ambition now is to life my life to the fullest – there’s no turning back.”