With Halloween fast approaching and pumpkin season well and truly underway, don’t let them go to waste this year. Instead, experts have shared some delicious ways for people to use their left-over pumpkins, as they are packed with a huge number of health benefits. Not to mention, using this year’s pumpkin’s will save money on buying other ingredients.

Not only are they some people’s weight loss go-to’s, but they also help to fight infection, look after eye health, keep skin glowing and promote strong bones.

In the last 90 days, Google has seen a 192 percent search increase for “pumpkin recipes”, and Bulk’s sports nutritionist, Abigail Roberts, revealed why they are a great addition to a person’s diet this time of year.

She said: “Pumpkin is incredibly nutritious, so it’s no surprise to see so many people searching for innovative recipe ideas this year.

“They are rich in beta carotene and vitamin C, which can both help to boost immunity and fight infections during the colder months. 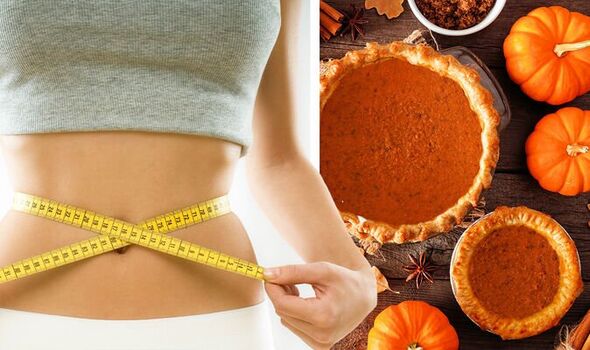 “Not only that, but it is a great low-calorie option, with just 26 calories per 100 grams!”

While some people are in their element in the kitchen experimenting with various dishes, others may need a bit of inspiration.

“Cooking your own pumpkin recipes from scratch can help ensure you’re getting the most out of this seasonal superfood, too, as many ready-made options only contain pumpkin spice, which doesn’t add any nutritional value to your diet,” Abigail explained.

She revealed the top pumpkin recipes that are quick and easy to make, will fill people with goodness and are weight loss-friendly, too.

According to data collected by Bulk, searches for this recipe have “exploded” by 453 percent globally over the past year

Abigail said: “Thanks to chickpeas, hummus is already packed with protein and fibre, so adding pumpkin to this easy dip is a juicy bonus.”

Roast in the oven for 45 minutes before cooling

A popular drink around this time of year, Abigail explained that instead of popping to a local coffee shop, make one at home.

“If you are trying to boost your health, coffee shop variations often contain lots of hidden sugar,” she warned.

But the nutritionist had good news, stating that making a homemade version is “definitely a better option”, as people have more control over the ingredients.

She recommended ditching the syrup and using sweetener or honey instead. Using unsweetened almond milk will also help to cut calories, whilst making your own pumpkin puree will ensure you get all the health benefits. 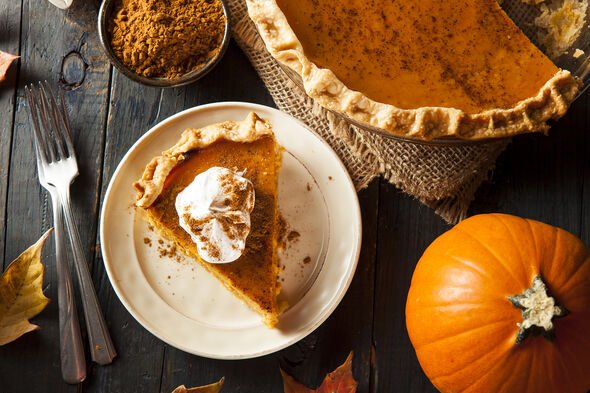 A traditional autumn treat, pumpkin pie is always popular during this time of year and unlike other varieties, it’s not too harsh on the waistline either.

One slice of small pie contains about 260 calories and 10 grams of fat and boosts a person’s vitamin A intake by around 250 percent, which is important for maintaining eye, bone, and skin health.

Place the pumpkin in a large saucepan, cover with water and bring to a boil. Cover and simmer for 15 mins or until tender, then drain the pumpkin and let cool.

Roll out the pastry on a lightly floured surface and use it to line a 22cm loose-bottomed tart tin.

Chill for 15 minutes while lining the pastry with baking parchment and baking beans, then bake for 15 mins. Remove the beans and paper and cook for a further 10 mins until the base is pale golden and biscuity. Remove from the oven and allow to cool slightly.

Push the cooled pumpkin through a sieve into a large bowl. In a separate bowl, combine the sugar, salt, nutmeg and half the cinnamon.

Mix in the beaten eggs, melted butter and milk, then add to the pumpkin purée and stir to combine.

Pour into the tart shell and cook for 10 minutes and then reduce the temperature to 180C/160C fan/gas four.

Continue to bake for 35-40 mins until the filling has just set.

Leave to cool then remove the pie from the tin. Mix the remaining cinnamon with the icing sugar and sprinkle over the pie. Serve chilled.

For people following a plant-based diet or trying to cut back on meat, pumpkin is a good healthy alternative.

“The sweetness of the pumpkin also helps to balance the spicy flavours, if you’re not a fan of super-hot foods,” Abigail added.

Saute peppers and onions to soften them, then add garlic, curry paste, turmeric, and cumin.

Add pumpkin, salt and pepper and cook until the pumpkin begins to soften.

Add the softened peppers to the pot along with ginger, lime leaves, fish sauce, lime juice, sugar and coconut milk.

Simmer until the pumpkin is tender then remove one cup of the pumpkin pieces and put them in a blender.

Process until smooth and then add chickpeas to the pot and let them heat through.

Stir in spinach and cilantro and cook a minute or two until the spinach wilts.

Another sweet treat but pumpkin cake makes a tasty and healthy addition, giving people’s dessert a dose of vitamins.

Butter and line a baking tin with parchment and put flour, sugar, spice, bicarbonate of soda, sultanas and salt into a large bowl and stir to combine.

Beat eggs into the melted butter, stir in the orange zest and juice, then mix with the dry ingredients till combined.

Stir in the pumpkin and pour the batter into the tin and bake for 30 minutes, or until golden and springy to the touch.

Smear low-fat cream cheese on top and store in the fridge until ready to serve.