The menopause can have an effect on women’s bodies in many ways, including their metabolism, changes in stress hormones and higher blood sugar levels. These can all cause weight gain, but a nutritionist has identified the best way to manage this symptom in the long-term. Tamara Willner, a nutritionist at Second Nature, suggests that by following a lower-carbohydrate diet, women are naturally increasing their intake of protein and healthy fats.

These are digested more slowly than carbs, meaning people are left feeling fuller for longer and reduce appetite.

Cravings for unhealthy foods have been found to sometimes be stronger during the menopause, especially for sweet foods, which are high in refined carbs.

Instead, Tamara suggests indulging in satisfying whole foods which are a good option when a person is craving something sweet.

She went on to tell Express.co.uk that also eating three proper meals each day fuelled with these foods, women are less likely to snack and avoid gaining those unwanted pounds.

But with hundreds of low-carb diets out there, it can be difficult for some to find good foods to eat as part of a meal.

Tamara recommended a go-to diet for menopausal women to follow and manage their symptoms.

Her serving suggestions cover three meals, snacks and desserts and are not only extremely healthy, but they’re tasty and easy to prepare. 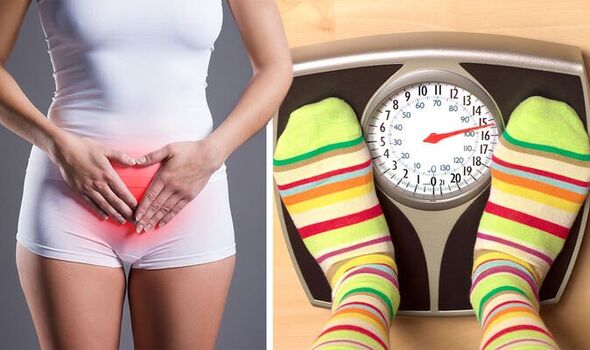 1. Combine the chia seeds, coconut milk, and water into a bowl and mix well.

2. Let this sit for 15-20 minutes (or ideally overnight), until the chia seeds absorb the liquid and a pudding-like consistency is formed.

3. Divide the chia pudding into two bowls or glasses, layered with the fresh mango, then top with the toasted cashew nuts and mint.

One tbsp mayo or vegan mayo

1. Rinse and drain your chickpeas, and mash using a fork or potato masher.

2. Combine all the ingredients into a bowl and season with salt and pepper and mix well.

3. Scoop the smashed chickpea mixture into the lettuce cups and enjoy.

Two and a half tbsp rice vinegar

175g baby corn, sliced in half

1. Prepare the beef fillets by cutting them in half and then along the halves in 2cm cubes. Add the cubes to skewers and set aside.

2. Mix the miso paste, soy, rice vinegar, and sesame oil until a smooth paste has formed.

3. Cover the beef skewers with the marinade, and let them sit while preparing the vegetables.

4. Heat one tbsp of oil in a wok, over high heat and fry the garlic and ginger for 30- 60secs, or until golden.5. 5. Add the red onion, cayenne, and baby corn, and cook for two to three minutes.

5. Add the sliced pak choi, mangetout, and soy sauce and cook for a further two to three minutes.

6. Take off the heat and add the sesame seeds (if using) and coriander.

7. Heat the other tbsp of oil in a grill or frying pan, over high heat.

8. Add the marinated beef skewers and cook for eight minutes, or until the outsides start to caramelise, and then serve with vegetables.

1. Add all ingredients to a food processor or blender, and season well with salt and pepper.

2. Place the fig halves skin side down in a non-stick baking tray, cover with butter, and cook for 15-20mins, or until golden and releasing juice.